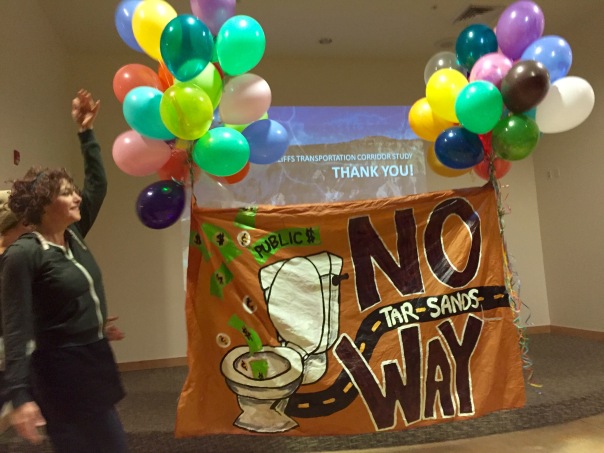 On Thursday February 11th, a meeting of the Grand County Transportation Special District was interrupted by a comical banner hang depicting a handful of public money being flushed down a toilet for the Book Cliffs Highway.

Spokes person for Canyon Country Rising Tide, Cindy Lewis said, “Grand County residents have been pushed too far. We’ve been resisting this road since the early 90s with legitimate public process. The Six County Infrastructure Coalition is now attempting to ignore our County Council and make a charade of our public process, so we’ll make a charade of theirs.”

The banner was displayed at a public presentation about the Book Cliffs Transportation Corridor Study – a $619,000 endeavor sponsored by taxpayers.

The Six County Infrastructure Coalition (Carbon, Daggett, Duchense, Emery, San Juan, and Uintah counties) intends to use this study to request $5 million taxpayer dollars to develop an Environmental Impact Statement for the project. The highway would be used to move oil, gas, tar sands, and oil shale from the Uintah Basin south to I-70. The Grand County Council pulled out of the then Seven County Infrastructure Coalition earlier this year, largely due to opposition for the Book Cliffs Highway. The proposed transportation route, which is entirely in Grand County, is estimated to cost between $110-200 million to construct with annual maintenance costs of about $1.2 million.

“We should be investing our public money in community controlled alternative energy projects, not roads to support the boom and bust tar sands industry,” said Cindy Lewis.

The Book Cliffs Highway Back Again

The Book Cliffs Highway, a proposed $3 million dollar per mile of paved road connecting the P.R. Spring Tar Sands Mine to I-70, has come up again. We’ve fought it off before, once in ’92 when Grand County restructured it’s governance structure, and again last year when the Grand County Council pulled out of the Six County Infrastructure Coalition in order to avoid being outvoted over support for this project in our county. It is very important to stop this project at all costs. Industry in that area includes fracking for oil and gas, tar sands mining and oil shale mining.  For these forms of extreme energy production to continue, they need a transport connection to a refinery. Truck traffic in the Uintah Basin to the North is at it’s maximum, and their plans for a rail system or a heated pipeline to the region have been thwarted. It is our job, as folks who care about this area, to get involved to stop this Highway from ever being completed.

The feasibility study on the road can be seen here.

The Grand County Transportation Special Service District will host a presentation about this on
February 11th  at 6 p.m. at the Grand Center, 182 North 500 West. 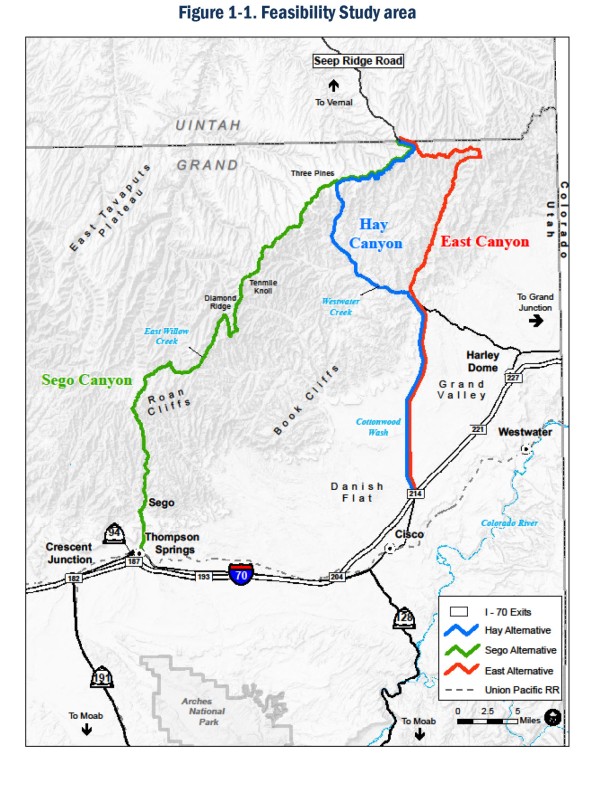