“Keep it in the Ground” protest interrupts BLM in Denver

LAKEWOOD, CO. Colorado community, climate and fracking activists hold up signs as they try to disrupt a Bureau of Land Management oil and gas lease auction May 12, 2016 at the Holiday Inn in Lakewood. The groups plan to rally and engage in peaceful civil disobedience to demand that public lands be no longer drilled, mined, or fracked. The protest is part of a global week of action focused on citizen action to keep fossil fuels in the ground and promote clean renewable energy, and comes days after the Colorado Supreme Court denied local authority to regulate fracking. (Photo By John Leyba/The Denver Post)

The next Federal BLM Lease Sale for Oil & Gas is in Salt Lake City on Tuesday morning. Show up, show our power.

DENVER – Hundreds of community, climate, and fracking activists today protested a Bureau of Land Management (BLM) oil and gas lease auction at the Holiday Inn in Lakewood, Colorado. Roughly 300 activists from Colorado and surrounding states marched to the BLM auction, carrying signs, banners, art, and singing chants. From there, a contingent of over 100 risked arrest by entering the hotel lobby and hallways, many of whom physically blocked the entrance to the auction room. The blockade and the crowd held the space for over two hours, delaying and disrupting the auction. 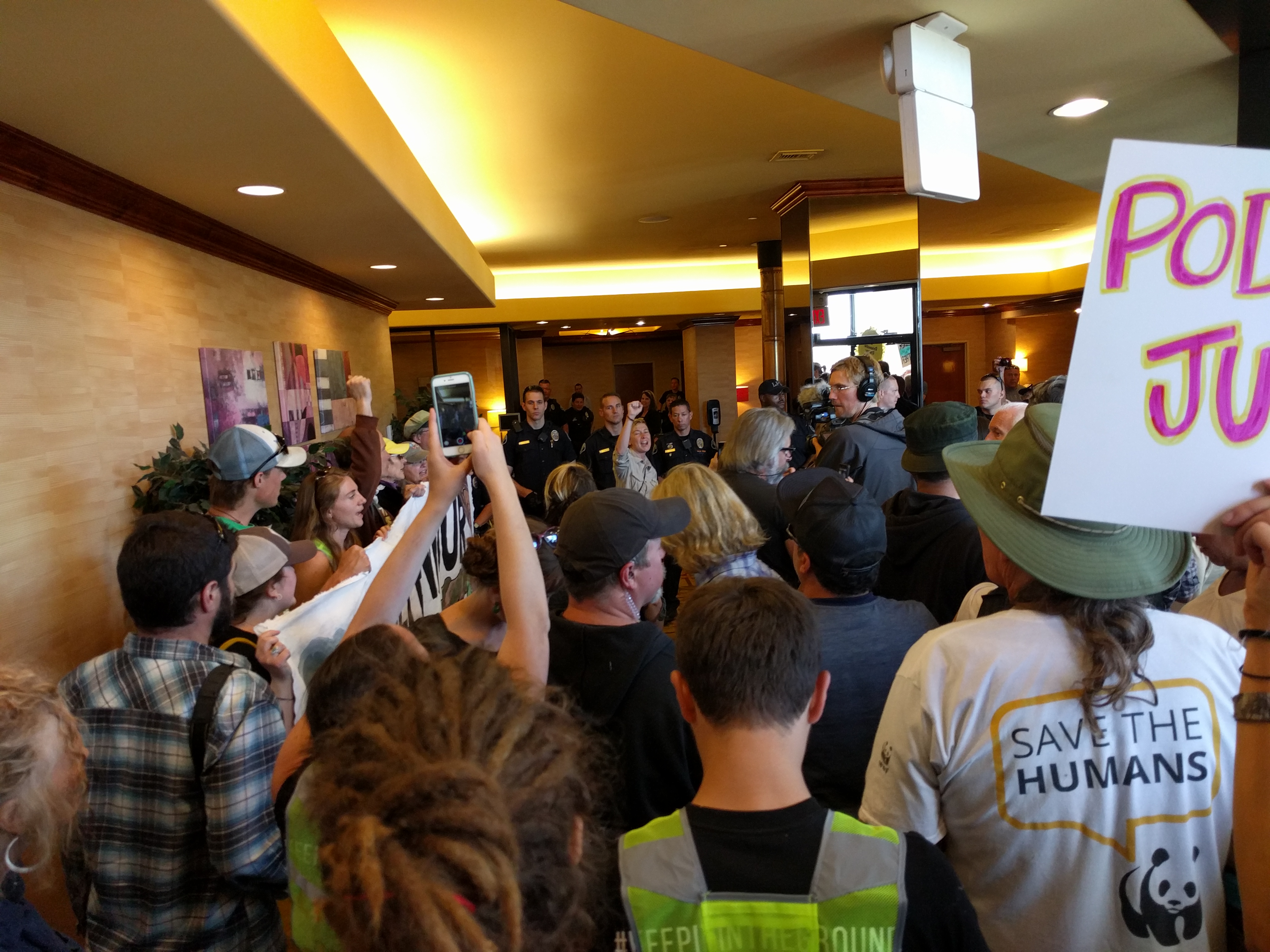 The protest was organized by a coalition of groups led by local Colorado activists. It was part of the larger “Keep it in the Ground” movement, which is calling on President Obama to halt new federal fossil fuel leases on public lands and waters, a move that could keep half of American fossil fuel reserves from being burned, and protect these resources for generations to come. Activists from all across the country attended today’s action, showing solidarity with local activists and drawing attention to a rising public lands movement in Western states that has been challenging BLM auctions for the last six months.

“Colorado and the public lands of the West are being treated as a sacrifice zone, with corporations profiting from the destruction of our communities, the landscape, and the people’s health,” said Remy, a Boulder-based artist and activist with First Seven Design Labs. “As an indigenous person, the language behind keep it in the ground has been passed down to me from my elders. It’s about respecting the land and the earth, and it’s about justice for people who are being denied it.”

Colorado’s public and private lands have been pockmarked by oil and gas wells in recent years. The state has also seen firsthand many of the devastating impacts of climate change, including massive flooding and extended, more intense fire seasons. The action comes just days after the Colorado Supreme Court denied community authority to regulate fracking.

“When our political systems fail us, direct action is one of the few tools we have left,” said Colorado activist and Greenpeace campaigner Diana Best. “People here are finished with industry and government making us sick, polluting our communities, and destroying the land we love. Today you can see that the resistance in Colorado is powerful and a key part of the escalating national fight.”

The coalition, made up of local groups including CREED, FrackFree Colorado, Colorado 350, Colorado Rising Tide, and many others, and supported by national groups including Greenpeace, Rainforest Action Network, Center for Biological Diversity, WildEarth Guardians, and 350.org was brought together as part of the Break Free global month of action. Artwork was designed by First Seven Design Labs and the Radical Arts Healing Collective, and built out by local community members. The coalition is now turning its attention to Saturday the 14th, when hundreds of community members will converge in Thornton to call for an end to fracking development in communities and on private lands. They will be joined by journalist Bill McKibben.